Educational experts agree that quality teaching is the most important factor in improving outcomes for all students. This book shows how teacher, school and district leaders can cultivate the expertise of teachers to deliver high-quality instruction. 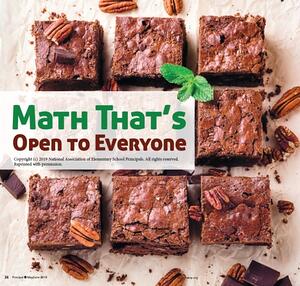 This article is copyright © 2019 National Association of Elementary School Principals. All rights reserved. Reprinted with permission.
By Renee Gallagher
A fifth-grade teacher at Springbrook Elementary School in the Kent, Washington, school district was introducing the concept of operations with fractions with unlike denominators to students. She presented them with a paper “brownie pan” and said they were hosting two friends and needed to divide the treats equally. Then, another friend showed up unexpectedly after the brownies had already been cut. How would they now share the brownies evenly?
Principal Ashlie Short watched as students cut their brownies and exclaimed excitedly as they realized that they could cut each third into four pieces. “Students had a visual in front of them. I heard one student gasp and say, ‘You just have to cut it the other way!’ They were excited about math,” she says.
Students continued to experiment with brownie pans and changing numbers of friends to see whether their methods for sharing always worked. After discussion, students worked individually to describe what they had figured out about fractions with unlike denominators in their journals.
The room was filled with students who saw themselves as capable mathematical thinkers and doers. You’d never know from the students’ newfound excitement and confidence that just a few years ago, Springbrook Elementary was an underperforming school showing little or no growth in student math performance.

Classrooms where students engage confidently as mathematicians are rare. Students more often experience math learning as passive and procedural, memorizing and replicating calculations that are divorced from understanding and meaning. Methods for solving problems would have been shown to students by the teacher instead of worked through collaboratively.
This is the version of math learning too often experienced by students who are perceived as less capable, students living in poverty, students of color, and students with disabilities. Many voices have called for a more “just” version of mathematics learning, but progress has been slow because the shift requires teachers to forge new beliefs about what it means for students to learn and do math.
The excitement in Springbrook Elementary’s fifth-grade math classroom was no accident. For six months, the University of Washington Center for Educational Leadership (CEL) had partnered with Springbrook to alter the way the school approaches math instruction. Our work supports teachers and instructional coaches by using side-by-side coaching methods and math studios to develop the skills and beliefs needed to help students experience more equitable math learning. These approaches allow all students to engage in mathematical thinking, even if they have gaps in their math knowledge.
At Springbrook Elementary, we have seen changes large and small take hold. The brownie exercise came about when a teacher brainstormed a way to kick off a lesson with entry points for all students. Instead of following a curriculum guide, she gave students an opportunity to engage with fractions. “That discussion would not have happened before coaching from CEL,” Short says.

Disconnects With the Concepts

Nearly three-quarters of Springbrook Elementary’s 530 students are low-income and minority; 40 percent are English-language learners. Four years ago, instruction was teacher-centric, and educators found it challenging to connect with students on math concepts. They attributed math barriers to students’ skill deficits, but CEL saw that students weren’t being asked to engage in high-level, rigorous thinking opportunities in class.
“There was this limiting belief system about what our students were capable of doing,” Short says. With CEL coaching, “we began to create some collective efficacy and this idea that our students’ learning is a direct result of our teaching practice.”
Even when students are missing a discrete math skill, they can engage in rigorous math work. But too often, teachers resort to rote practices, “breaking it down,” and funneling students to answers. Not only does this not increase students’ mathematical understanding, but it also often demotivates students by confirming the belief that they are not able to do math.
Fifth-grade teacher Meg Whinna knew that her math lessons weren’t succeeding but didn’t know how to fix it. “I felt like I was telling them what to do, and nothing was getting translated into their brains,” she says. “I was doing all the thinking and then expected the students to just parrot my thinking.”

Whinna and other teachers at Springbrook spent a year working on math instruction through a collaborative lab model, practicing instructional routines and getting feedback. There was some progress, Short says, but big changes in teacher practice came after an intensive CEL-supported two-week math camp in summer 2018.
At the camp, teachers, instructional coaches, and school leaders spent several hours per day planning engaging, accessible, and rigorous tasks with clear learning targets that focused on important mathematical concepts and included rich discussion opportunities. The goal was to ensure that all students—regardless of current skill level, background, or past success—would be asked to reason deeply about important math ideas.
Teachers identified factors such as overhelping and funneling as decreasing cognitive demands, as well as factors that help maintain them, like allowing students to rephrase peers’ ideas. We developed a common language to describe what we hoped to see from students and what actions we could take if we didn’t.
At the math camp, teachers worked in pairs to co-teach a lesson as they received side-by-side coaching from myself and a school-based instructional coach. Back in class, coaches supported teachers’ instructional decisions in real time—suggesting a pause to ask students to discuss ideas, for example. This allowed the teaching to become more transparent as instructors reflected on what was happening with the students in class and made decisions based on their needs.
Teachers gauged their impact along the way. “You would have these micromoments and microevidence” of impact, says Casey Harkleroad, a Springbrook instructional coach. CEL coaching “was instrumental in getting teachers to see how their direct teacher moves impacted student learning.”
Following a lesson, the entire group of teachers, coaches, and school leaders identified factors that appeared to support students’ thinking, using the information to plan the next day’s lesson. Whinna found the process supportive and challenging, and after two weeks, certain techniques were becoming habit. “There was so much value in really slowing down the process of planning lessons,” she says. “I don’t think I’ve had my brain as tired since college.”
Coaching helped keep her on track in the moment, Whinna adds. “If I had the option to have a coach here all day sharing their ideas and thoughts, that’s how I’d teach constantly,” she says. “That would be heaven.”

During the two-week math camp, one of the biggest shifts was in the way teachers viewed students’ abilities and the role their own instruction played, referring regularly to a list of factors that maintain or decrease a rigorous learning environment. At the outset, they overwhelmingly identified students’ lack of background knowledge as a key factor in making student learning and thinking less rigorous. But by the end of the two weeks, they instead identified factors such as “lack of visuals to support sense-making.” “They were so much more reflective about their own practice,” Short says.
Teachers had to recognize their own contributions to a sometimes less rigorous math environment—a conversation that can be challenging for school leaders to guide. Working with CEL helped start difficult conversations in areas that otherwise might have been constrained by politics and relationships. “My team is open to this level of growth because they feel honored,” Short says. “That seems to make everyone willing to open themselves up.”
It helps to view teachers as performance professionals, she says, like a surgeon or professional athlete. This idea helped them feel comfortable about building their skills, not defensive about past practices. “If we believe that teaching is a sophisticated set of learned skills that requires repeated opportunities to practice, we have to create the systems and structures to support that,” Short says. “Teachers found a tremendous amount of value engaging in the coaching cycle.
“The level of teacher knowledge has grown so much as a result of this work,” Short says. “Educators feel more empowered and confident. They believe that students can do high-level thinking and work in math, and they also believe they can develop the teaching skills required to make that vision a reality.”
Download Now

By clicking on any link on this page you are giving consent for us to set cookies. More Info.

This website uses cookies so that we can provide you with the best user experience possible. Cookie information is stored in your browser and performs functions such as recognising you when you return to our website and helping our team to understand which sections of the website you find most interesting and useful.

Strictly Necessary Cookie should be enabled at all times so that we can save your preferences for cookie settings.

If you disable this cookie, we will not be able to save your preferences. This means that every time you visit this website you will need to enable or disable cookies again.